Buckle up for another column by our resident Asshole Bride, who says what a lot of us are thinking, but manners prevent us from saying. This week it’s why having a grooms lady is a bad idea. What about having a bridesman? Maybe that’s a topic for another day. Also, we won’t actually be discussing why in the header image they seem to think they’re posing for a hipster album cover.

Okay, look I’m a giant feminist. I don’t like gender roles, I think most things about weddings are just saying women are property, I hate catcalling. But holy fuck balls I have never seen a wedding where having a grooms lady worked out well. One of my bridesmaid’s had a grooms lady in her wedding. Because she was the groom’s best friend. Guess what? She was in love with the groom. She did nothing for the couple, her speech was a disaster, and another groomsman (my husband) had to throw together a bachelor party and take over her toast because she was actually against the wedding but thought being a part of it would stop it. 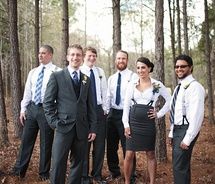 But she is another post for another day.  Let’s talk about the grooms lady in my wedding party. We will call her Beatrice. Beatrice’s boyfriend, “Greg” was also a groomsman. Now, we are nice people, we understand the cost of being in a wedding party. We asked our bridal party 18 months in advance. We told them they needed to buy clothes and pay for their accommodations for 2 nights if they were out of town, because we needed them at the rehearsal. Standard shit. Let me break this down financially for you. We are all in our 30s (or close to it), our hotel rooms were $79 a night. The girls outfits were $68, the boys were $104. For those at home who can’t do math, we were asking for $252 plus travel costs (about $85 in gas at the time) from this couple. So $332. Over 18 months to save up that’s less than $20 a month to set aside. $5 a week even. Not too terrible right?

ASSHOLE DISCLAIMER: Yes, everyone has different financial situations and sometimes $5 a week is a lot to spare, I totally get it. But if that is the case, you don’t agree to be in someone’s freaking wedding capisce?

So Beatrice asks what kind of clothes she should wear. Valid question. I tell her she can either get the same dress as the other girls, OR she has the option of the same clothes as the dudes, but tailored to fit her. The girls dresses are being ordered custom on April 3rd the year of the wedding, almost six months away at the time she asks. The dudes clothes had to be ordered a week prior. Beatrice says that she would rather match the dudes, but was wondering if she could go to like Kohl’s and find something similar. No problem! I, The Asshole Bride, am also reasonable. I send her some links to get her headed in the right direction and promptly move on to wondering why people are asking if they can bring McDonald’s to the wedding.

Four months out from the wedding: Greg calls. Greg says if he and Beatrice can not STAY WITH US THE NIGHT OF OUR WEDDING they can’t be in the wedding. The hotel is too much. My response was one of laughter and a resounding “No.” Who in the fuck asks to share a room with a couple on their fucking WEDDING NIGHT??? Are you going to critique our coitus? Get the fuck right out of here with that. But two days later Beatrice calls and says she sorted it out. Grand.

Six weeks until the wedding: Beatrice calls. “I don’t want you to worry Asshole Bride, but I still haven’t gotten clothes. I’m going this weekend to get it!” Okay, that’s alright I guess, I have too much shit going on to focus on this right now, plus you’re solving it in a few days. Whatever. Husband calls Beatrice and tells her she needs to have her clothes in 2 weeks no exceptions. “No problem, going tomorrow to buy them! Don’t worry!” So we don’t. Because we’re fucking idiots.

Three weeks until the wedding: “Hey Beatrice! Get your clothes? We haven’t heard from you!” Oh lord, I should have seen this coming by now. “Oh, yeah so I don’t have the money to buy them. I’m going to order fabric tomorrow and sew my clothes!”

Hi guys. Let’s talk for a second before you feel any ways about this. Beatrice can not sew. She can maybe sew a Halloween costume with a gun to her head and not end up naked, but she can’t sew to the caliber of formal attire. I happen to sew and quite well. The fabric required is more than the items I gave her as examples combined. The amount of time needed to get this done is more than she had at this point. Also, she can’t sew. Our wedding was very formal at least in aesthetics. Everyone was dressed up. Formal. Fucking. Attire.

So once again, I responded with some loud ass laughter and a resounding “No.” Followed by “Under no circumstances is that acceptable.” We got the following as a response. Copied verbatim from Facebook. Because I hope her ass finds this site when she gets married, sees this, and cries herself to sleep at night:

“You’re killing me. I would appreciate a little faith that I am not a moron nor am I a disappointer. Please give me until Saturday when I will send you pictures of the skirt and vest that I will have completed in hand that will perfectly match the men’s warehouse items. I can not find a women’s grey vest that I can afford that is not being mailed from China and will arrive in time. Even as of Saturday, I still have 3 weeks. I get that it is your wedding and you want to be sure everything is perfect, but I am not stupid. I am not going to show up in nothing nor the wrong thing.”

Guess what? I don’t play these fucking games, and you shouldn’t either. So I tell her calmly: “Making clothes for it was not an option on the table, I’m not entirely sure why you assumed it would just be okay without a discussion. The only reason you have gotten an option of what to wear is because Men’s Wearhouse doesn’t rent or sell women’s clothes. We are not comfortable with the idea of you making clothing, it was never even mentioned to either of us prior to last night and definitely not okayed. I understand that now it is a time crunch, but you have had six months to get appropriate clothing for the wedding. Also, this is something we need to have finalized by tonight. I understand that in your mind there are still three whole weeks until the wedding, but to us there are ONLY three more weeks until the wedding. We have hundreds of things we need to follow up on and confirm, and this should not be one of them.  Geoff had asked you to have everything taken care of by the end of last week, which is four months after everyone else was required to have their clothing purchased, and you disregarded that. If this is not something you feel like you can handle, there are no hard feeling in any way if you would rather just attend as a guest. But if that is the case, Geoff and I need to sort out how we will be handling the actual ceremony tomorrow, so we have to finalize things tonight.”

Beatrice did not see fit to dignify me with a response. Instead, she had Greg call my husband to sort it all out. Thankfully, my husband is a good man, and explained to Greg how Beatrice was not going to get her way this time, that it was not her wedding, but ours, and she had to play by the same rules as everyone else. All the while Beatrice is in the background yelling about how she’s making it now and just give her time and we’ll see how we were wrong. Greg seems to understand, and then says “Hey, it’s not a big deal that we can’t make the rehearsal right? We can’t afford the hotel so we’re going to drive up for the wedding that morning and leave the same night to head home.”

Well, guys, I’m not exactly proud of this, but I lost my shit at that point. You mean to tell me that in 18 months, you’ve only managed to put down $20 on a suit rental, but lied to us about everything else, claiming your broke, but have spent every other weekend out of town at LARP events that cost money? Because you posted it all on Facebook. So we saw it all. And my husband is in the same LARP, so we know what all the events cost.

My husband removed her from the wedding party after we talked it over. Greg bitched he lost his $20 deposit for his suit. We explained to Greg he was still welcome to be a groomsman, but apparently he wasn’t going to do it without his woman. Whatevs bitches.

I waited at the wedding to see if she wore whatever monstrosity she made to the reception because she is that type of “I’m going to prove everyone wrong” idiot, but no dice. Pretty sure she never finished it.